What does it take #5 Interview with Third Son Third Son is the alias of techno producer and DJ Joseph Thomas Price. Born into a musical family, Joseph studied many different styles of composition from an early age. In Third Son Joseph combines throaty basslines with fluttering synths and heavy percussion and, in doing so, enraptures his audience with a unique and refined sound.

In this interview he speaks to us about his experience within the music industry, journeying from when his initial interest was piqued, to the present day DJ playing to thousands. Take note, because this kind of information can be rather difficult to come by.

From what I understand you come from a musical background. Growing up what kind of music did you listen to; did you play any instruments?


My dad was a lecturer of music at a university, so I was always exposed to classic, jazz and experimental music. Anything you would expect from traditional instruments. My first instrument was the piano and then I moved onto more obscure wind instruments, but lets not talk about that.


By thirteen I was super keen on guitar, mainly because I wanted to play solos like John Frusciante and Steve Vai. Once I reached grade 8 I began transitioning into electronic music writing.


When did you first start appreciating house and techno and what artists initially inspired?


I was really into a band called sky eats airplane. It was rock music but with gnarly electronic synth sounds and FX. I then slowly started to discover bands like Massive attack and Autechre and then had a massive phase in my teens obsessed with Amon Tobin. It’s not technically techno, but that was really the gateway for me


What and why were you inspired to start DJing and producing? Tell us a bit about your first songs and your first gig.


I’ve always made music, whether it was on the piano or when I first found fruity loops on my brothers computer when I was about 14 years old. I used to be really into ambient music, probably derived from a combination of Mike Oldfield and Boards of Canada.


I was in bands for years as a teenager, but my first DJ gig wasn’t until uni, playing in the ‘Alternative' room at a commercial club. The sound system was questionable but it gave me a chance to try out early productions in a big room. I think it’s crucial to learn how tracks translate from the studio to a club as early on as possible, and you can only really do that by playing out.


Tell us a bit more about your early production and DJing. What was your first equipment like?


Production wise, a computer, pretty much. In fact I used to love making beats with Music 2000 on the Playstation as a kid, which was essentially just compiling loops - but it was great fun.


The first DJ rig I had was actually borrowed off my best mate in uni. It was an early version of Serato, some 1210’s, and a beasty old allen and heath.

You’ve come quite far from where you started, so how do your initial gigs compare to the shows you play now? What’s been your favourite show you’ve played?


After starting out at student nights it’s nice to now be playing venues where I can play exactly what I want to. My favourite gig so far was probably Space in Sharm. There were some really great moments, especially when I was playing my own tracks. There’s no better feeling that. It’s pure gratification. 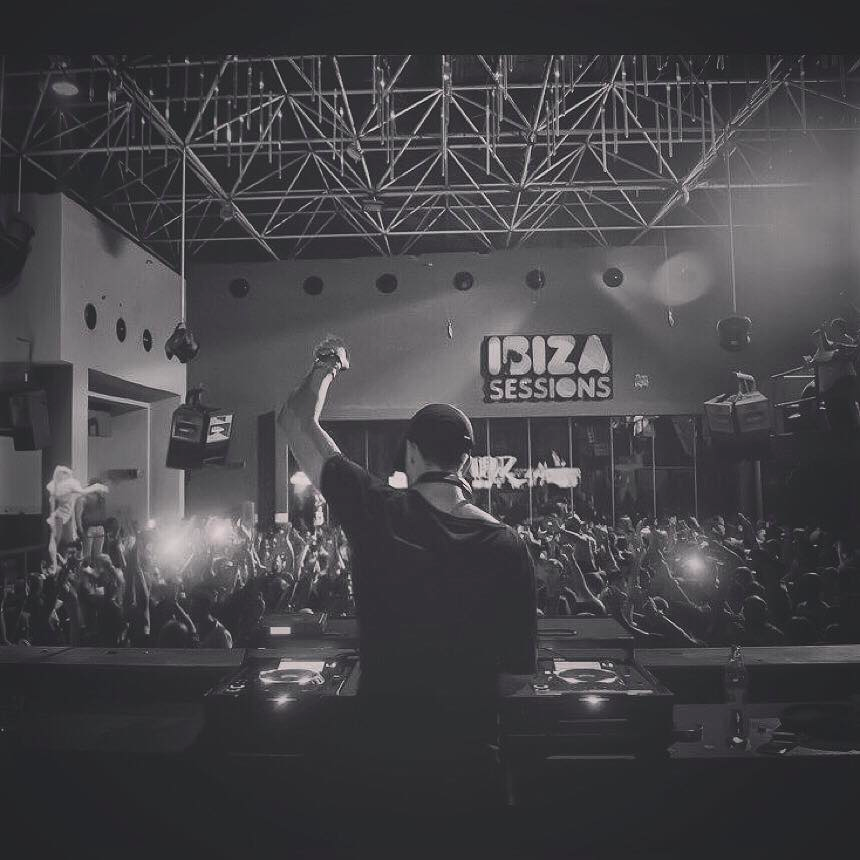 You’ve made a fresh start with Third Son, but what aliases did you release under prior to changing your pseudonym?


Third Son is my third project. Before this I was releasing music under the alias Origins Sound with the same guy who lent me those decks. That project was a crucial part of the puzzle.


New artists often struggle to have their music listened to in a crowded market. How did you go about trying to get your music heard by a wider audience?


I was lucky enough to start with Kal, my manager. We sent out demos straight away and Noir signed my first EP within pretty much a week of conception.


After that for me it was about making as much music as I possibly could without skimping on quality. Signing material to a spread of labels early on certainly helped in getting off the ground, but it’s true - it is hard for young artists as there’s so much noise out there. That said, we’re now better equipped than ever before. Getting mixes out there, locking down gig bookings, and generally being pro-active about what you want to ultimately achieve will help your music find the right people.


Contacts can be very important within the music industry. Did you have any useful contacts before you started working in a more professional capacity?


Actually no, my contact list was pretty poor, but that’s why having a manger was so crucial for me early on.


I’m sure there are many things you wished you had been told before you were signed. What advice would you give to any budding producer or DJ?


To start with, focus on quality over originality. Trying to be original while learning the craft is impossible and you can get bogged down with the idea itself. Reach a point where you’re comfortable creating a range of sounds and original music will come as the sum of your influences.


You just moved from Bristol and are building a new studio. What has this process been like and what notable piece of equipment in the studio?


I’m now living in east London with a basement studio complete with LED ceiling (It came installed). For me the acoustic of the room is paramount, so probably my mega thick rugs and base traps. The Aira stuff is pretty fun to jam on and I have a couple of analogue keyboards, but I have so many great soft synths that I’ve used for so long now I feel I can pretty much create any sound from them e.g Arturia, Arp 2600, Jupiter 8, Sylenth 1. 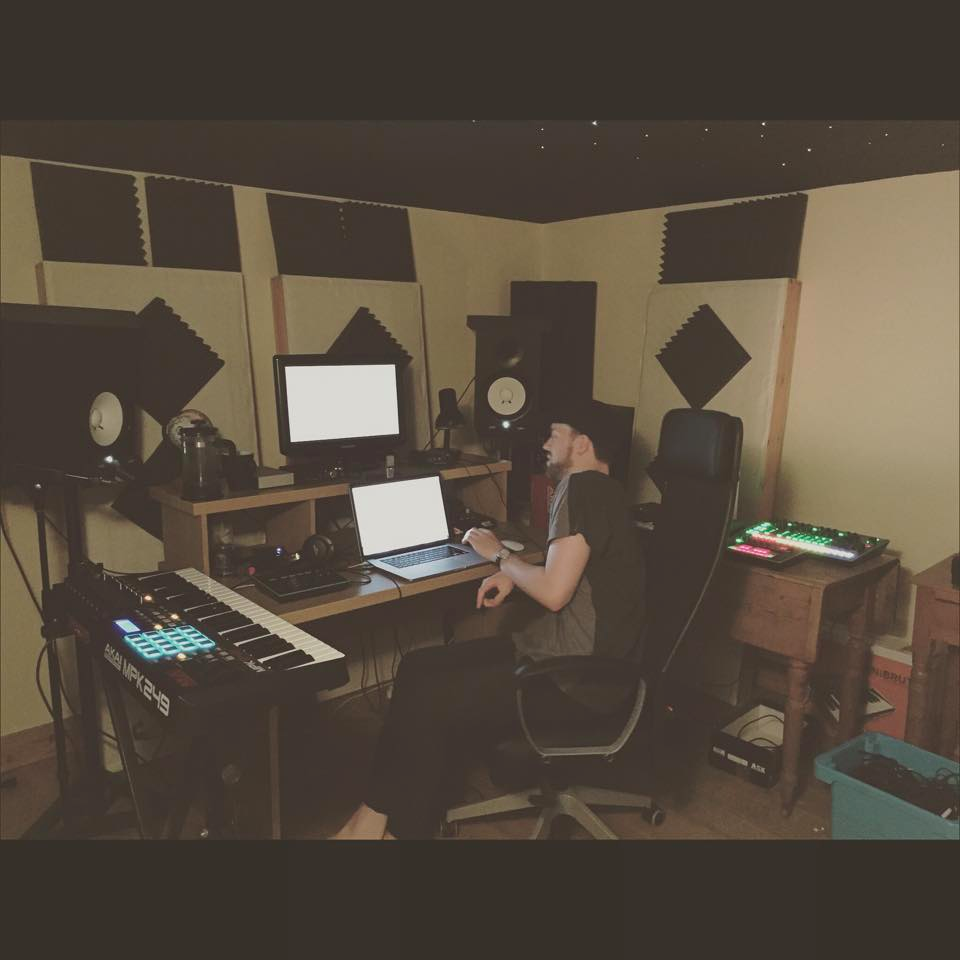 You are currently signed to Sincopat. Why did you decide to sign to the label and what about their philosophy and sound attracted you to them?


I’ve always loved their music, more consistently than any other label actually. I also really like the way they work. They’re professional and uber cool guys.

You recently released your Get to the Chopper EP on Sincopat. What can we expect from you in the coming months? Any new music or exciting gigs?

Got a few follow up EPs with various labels, 303Lovers, Definitive, Underground Audio, and an EP with Einmusika that i’m looking forward to. Gigwise, I’m playing quite a bit in europe and the middle east at the moment. Doing my first India tour in November so pumped about that.


We hope this information is helpful for anyone trying to forge a path within the music industry. If you haven’t heard Third Sons music check out his Soundcloud - https://soundcloud.com/thirdsonuk
Posted on 10 Sep 2015

How to use Traktor in our Studio

This is an easy to use guide on how to set up Traktor with our studio equipment - DJM-900 mixer and CDJ-2000s.

It’s important to stress that Traktor may be the first step on the road to your dream DJing career, and that once you’ve familiarised yourself with the software, you may want to move on to CDJs or vinyl so you can develop and refine your skills.

Of course, to help you feel like a real DJ it is essential that Traktor works with both a mixer and CDJs.

Before you begin to connect your laptop to the hardware you’ll need to have the correct drivers installed on your computer. The drivers for the DJM-900 can be found here: http://www.pioneerdj.com/en/support/software/djm-900nxs.

If you’re a windows user you may also want to download the drivers for the CDJ-2000s here: http://www.pioneer.eu/uk/support/software/CDJ-2000/page.html#download_189.

Once these are downloaded, plug your mac or PC into the mixer and the CDJs with three separate USB cables. If your computer doesn’t have three USB ports you will need to use a USB hub, which can be provided.

The Setup Wizard is an invaluable tool for getting started with Traktor and Pioneer hardware. Access the wizard by first clicking on the preferences icon (the cog icon) in the top right hand corner of the screen.

The wizard is situated in the bottom left hand corner of the preferences menu, just bear in mind that if you have custom settings loaded the wizard will overwrite them. This means it may be a good idea to save your own preferences first.

When using our equipment choose the ‘yes’ option when prompted to select a hardware controller and select Pioneer as the manufacturer and the CDJ-2000 as the controller. 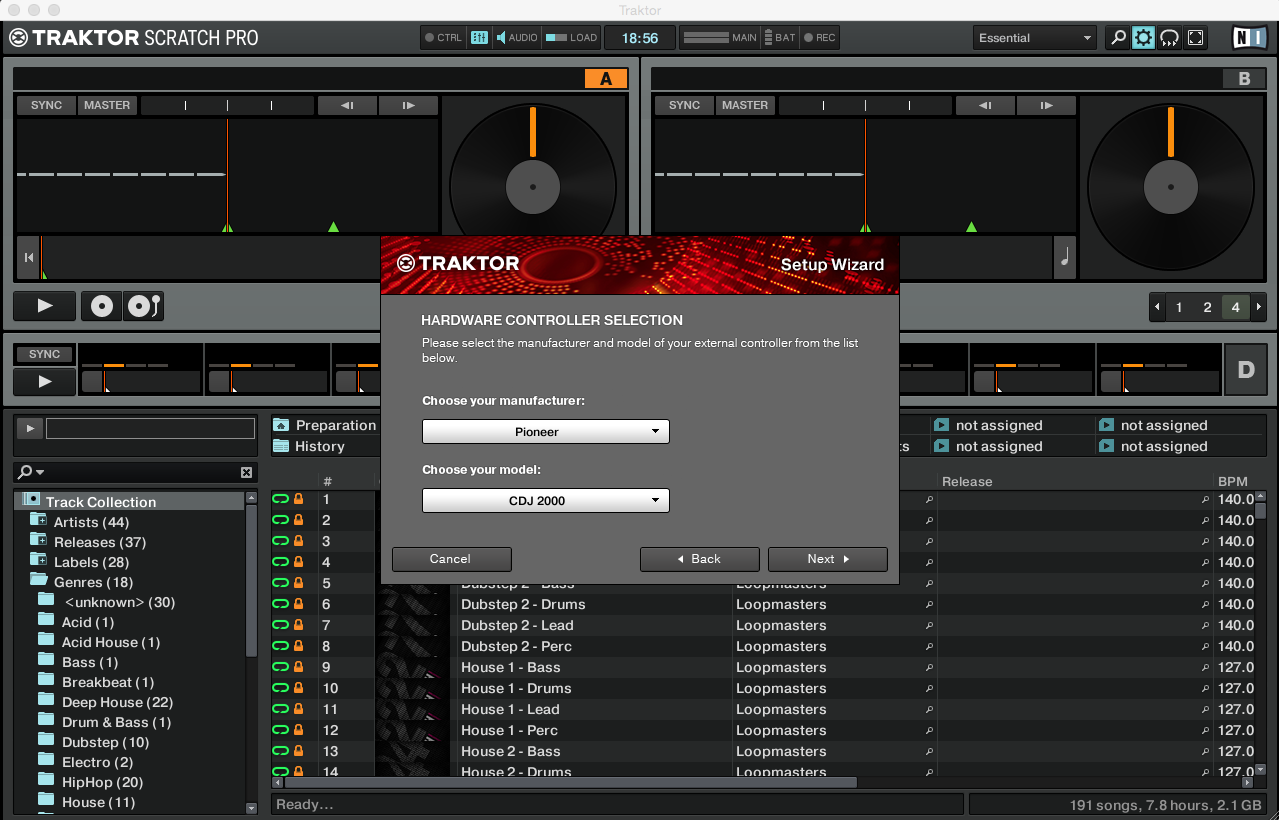 If you are prompted to choose a mixer select ‘yes’ at the appropriate screen and choose Pioneer and the DJM-900nexus. You can then choose your deck preferences within Traktor.

You may also need to make sure that audio setup is configured in the correct manner. This is where you need to go if you’ve run the setup with the DJM-900 previously, but have used Traktor with another interface since. If you have already run the wizard these options should be selected. Just bear in mind that the DJM-900 should be the selected audio device in the preferences menu. 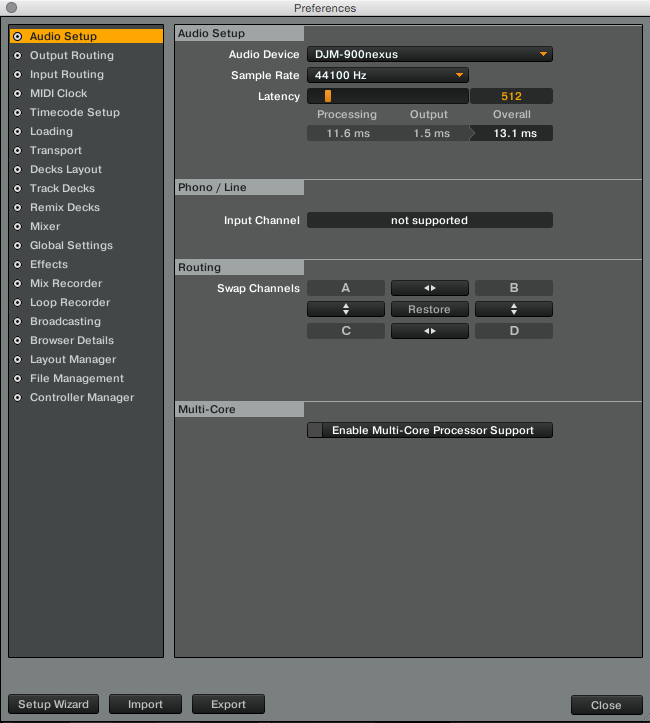 In terms of output routing just make sure your version of Traktor matches the image below. 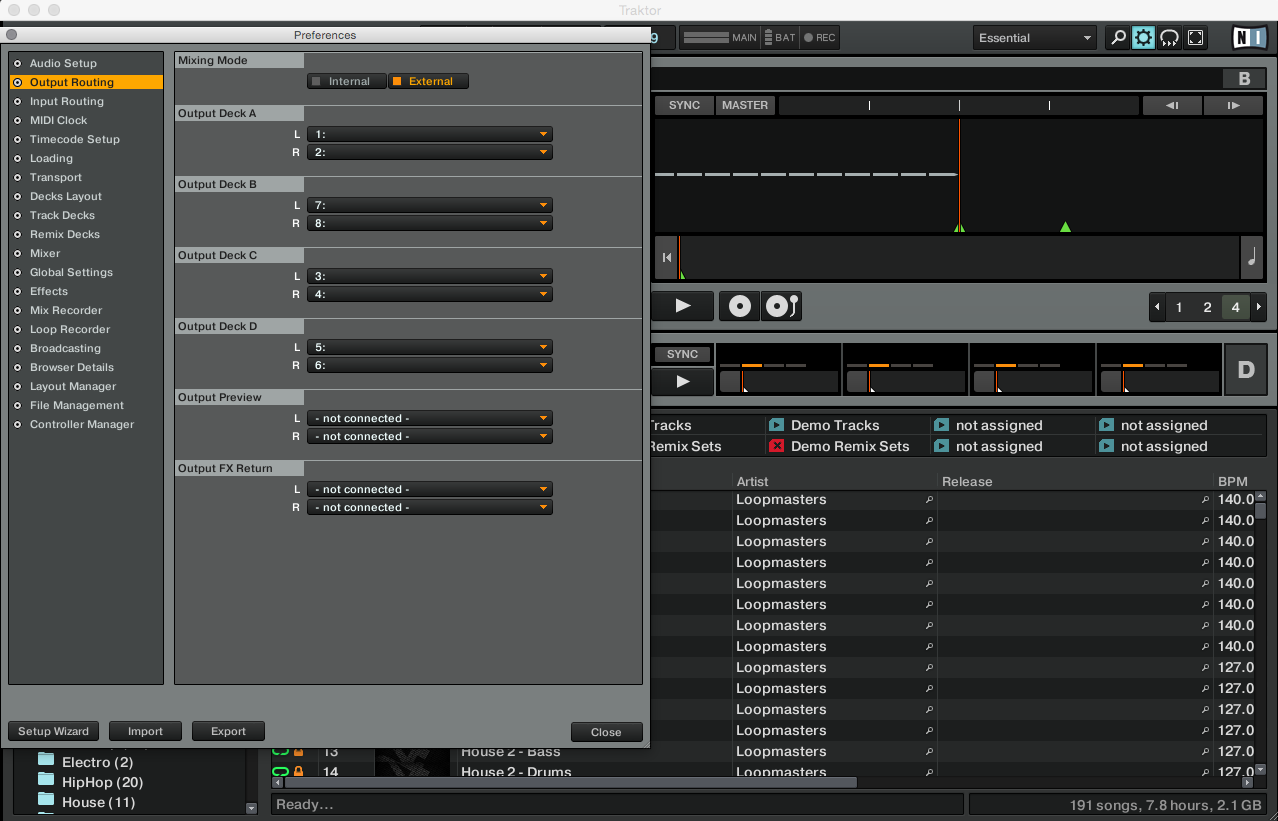 You will also need to make sure that the correct inputs are selected on the DJM-900 itself, which is the USB option furthest to the right on each channel. For example, the knob on the right at the top of the first channel of the mixer says ‘1/2’ which corresponds to the stereo signal of the CDJ that is connected to that channel.

You will then need to select the ‘LINK’ option on the CDJs and choose Traktor. If you cannot select Traktor, you may need to go to controller manager in the preferences menu and select the CDJ-2000s. 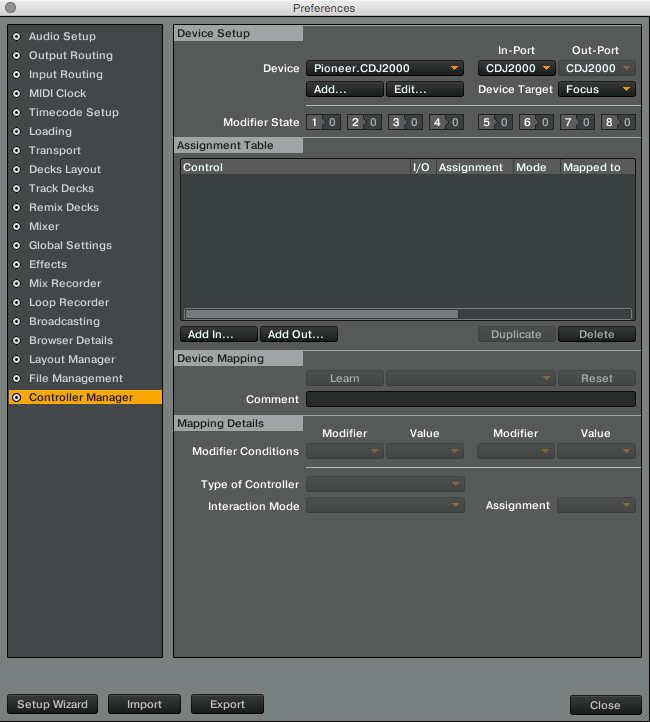 You will then be prompted to push in the knob on the front of both CDJs to initialise Traktor and can begin playing.